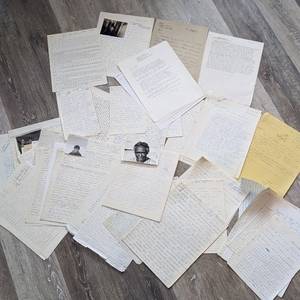 Uppinaq–Letters from Nunavut: Inuit Culture Loss and Survival in the 1960s and 1970s will review over three dozen letters with hopes of making the content available to society and accessible for future generations.

From the boundless territory of Nunavut come fragile and carefully kept documents that changed the history of not only northern Canada but the entire country.

A new research project at Menno Simons College (MSC), funded by a grant from the Government of Nunavut's Department of Culture and Heritage, will be translating and analyzing over three dozen letters that were handwritten in Inuktitut syllabics by Nunavut Elders in the 1960s and 1970s.

Led by MSC Teaching Assistant Professor Lydia Schoeppner, the project entitled Uppinaq–Letters from Nunavut: Inuit Culture Loss and Survival in the 1960s and 1970s will review the letters with hopes of making the content available to society and accessible for future generations.

"These are incredibly important documents of Inuit history in Canada," says Schoeppner. "Inuit and Indigenous people have been silenced in the past by the government, so it is important to make these voices and stories available to the larger public because we are helping with retelling Canadian history from an Indigenous and Inuit perspective."

Schoeppner will collaborate with Tagak Curley, an Inuk politician and advocate of Inuit rights and Stacy Paniyuk, an Inuk student participating in the Indigenous Summer Scholars Program offered by the University of Winnipeg. This program connects Indigenous students with academic, collaborative, and community-based research projects.

As the one to whom the letters were addressed, Curley plays a central role in this history. "As a young man, I felt obligated to try and restore our tradition," says Curley.

"My people were passionate and resilient survivors of the fittest in our harsh but rewarding land that we've occupied for thousands of years," says Curley, "I was raised and learned that Inuit didn't fit into the Canadian society and were assimilated without regard to our language and culture... I wasn't about to have it ruled by foreign ways that are determined to destroy our rewarding history and culture."

Curley says that in the late 60s and early 70s, letters were the primary mode of communication for the vastly scattered territory of northern Canada. When he contacted Elders, the medium served initially as a simple way to connect with Elders.

Altogether, over 30 letters were sent to Curley outlining the loss of values and customs that needed preservation and should be passed down to future generations.

While Schoeppner says they have a rough idea of what the letters say, a significant part of this research project will be getting the letters translated.

"The letters are actually written in an older form of Inuktitut. Inuktitut was reformed at some point, so [our translator] will need lots of time to figure out what exactly is in the letters," says Schoeppner.

Once the translation has been deemed accurate, the team will organize and catalog the letters. This entire process began in May of this year, and Schoeppner is optimistic that the project will be completed in December. Schoeppner says, "I'm excited about the letters and honestly, really curious to see what the Elders had to say."

"The Elders took time to write the letters at a time when their culture was still in the oral tradition," says Schoeppner. She says that the medium placed a greater significance on the importance of the letters.

These letters served as the impetus for forming the Inuit Tapiriit Kanatami (ITK), a non-profit organization that helps nationally to protect and advocate for the rights and interests of Inuit in Canada.

As a founding member of ITK, Curley and others conceptualized ways to structure an Inuit organization that voiced the concerns of their people. Since then, ITK has worked on land claims, created policies for Inuit health priorities in parliament, advocated against encroaching pipelines, and helped establish the Nunavut territory in 1999.

"This project really bridges generations," says Schoeppner. By studying the letters written by Elders who have now passed away, Schoeppner says the research team is excited to bring history into the present.

Curley says he gave the project its title. Uppinaq means to honor and respect. "I was born to honour my tradition and not let it be destroyed," says Curley.

MSC is a program centre of Canadian Mennonite University.