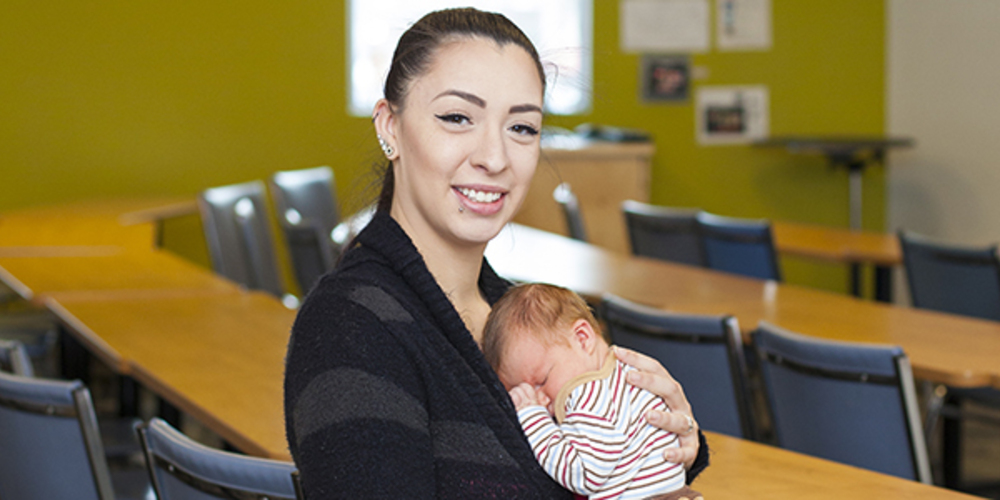 Jaimie Sanderson sits near the back of the class, her notes in front of her and her two-week-old child, River, in the baby carrier on the floor to her right. Sanderson has a month of classes left, but pregnancy and giving birth mid-semester have not stopped this student from achieving her goal of earning a degree in Indigenous Studies Honours and Conflict Resolution Studies.

"I grew up in care, so I'd really like to work in children's advocacy," the 23-year-old says.

Sanderson plans to graduate in April and go into the Master of Social Work program at the University of Manitoba.

"The fact that I can relate directly to these kids is so important," she says. "That was a huge issue for me growing up. How can counsellors and care workers truly understand when so many grew up in such a privileged setting?"

"Understanding how conflicts work and how they can be resolved, it's a basic necessity these days with how much conflict is going on in societies."

Being a full-time mother to a newborn and a toddler while being a student has its challenges, she says, but it also has its rewards.

"Sometimes I think I'm going to lose my head, but then I see my daughter sitting there with her own little books that she calls her study books, and it reminds me why I'm doing this."