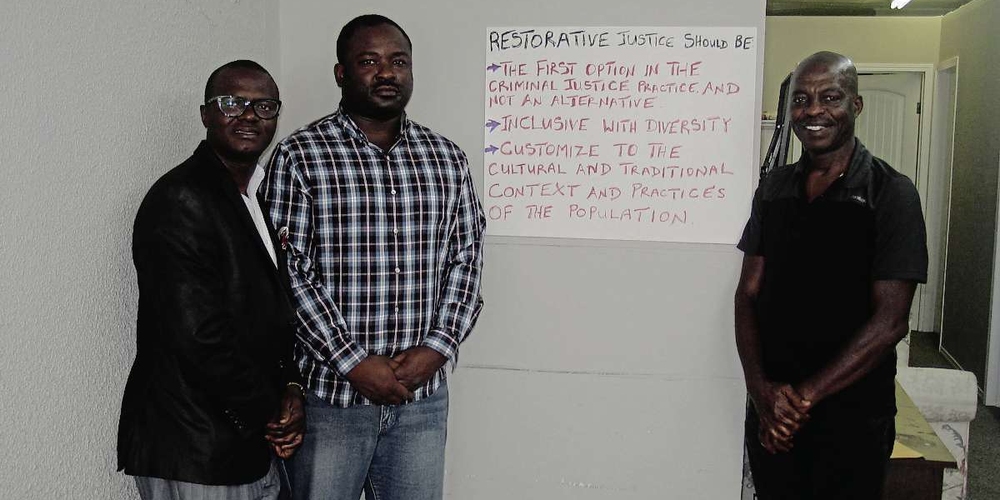 Before Victor Kaicombey had even heard of the Conflict Resolution Studies program at Menno Simons, he’d survived Sierra Leone’s decade-long civil war and provided leadership in their Truth and Reconciliation Commission. The restorative justice model is one which he describes as a “traditional approach” to dealing with conflict in his homeland.

While the north american model of retributive justice traditionally focuses on the perpetrator of a crime and little else, the restorative model brings together three primary stakeholders: the perpetrator, the victim, and the community. Rather than having its sights set on punishment, the goal of restoration is bring a fuller healing to both the victim and the community affected by the crime. In some Sierra Leonean cases, this means that there are individuals who killed their neighbours during the genocide but have now been reintegrated into their communities and are living “as productive members of society.”

After immigrating to Manitoba in 2005, Kaicombey became concerned about the rates of incarceration among newcomers and indigenous people in the province. He believes that not only does locking people up fail to rehabilitate them; in many cases, it isn’t even a deterrent.

Furthermore, victims are given no role in the justice process beyond the victim statement taken by police. Canadian law enforcement doesn’t care about the victim, says Kaicombey, resulting in a lack of closure which creates unnecessary trauma and a sense of powerlessness.

Kaicombey graduated from Menno Simons in 2013 and continues to be an activist for restorative justice in Manitoba. He sits on the board of directors for the national restorative justice consortium and on the advisory council for the Manitoba minister of justice, in addition to doing independent consulting for non-profits around the world.

Most recently, he’s spearheaded a restorative justice process for Sierra Leonian newcomers in Winnipeg. The “We Yone Palaver Hut Project” launched in August of 2016. The pilot project trains community leaders in “alternative traditional dispute resolution in order to resolve community disputes through mediation.”

Kaicombey is hopeful that acknowledging traditional wisdom and culture in this way will empower newcomers to take responsibility   for peace-making and crime prevention in their communities. Rather than being alienated and feeling driven into deeper cycles of crime, this model allows the perpetrator of a crime to be restored to his or her place in the community. In makes rehabilitation and reconciliation actually attainable.

Kaicombey believes that incarcerating a young offender, particularly for a non-violent crime, is like putting a band-aid on an infected wound. It simply pushes off the inevitable without dealing with the real roots of the problem. Instead, he is lobbying for a system where offenders can see and understand the consequences of their actions and be duly remorseful. Victims and communities must also have a role in deciding the best resolution following an offence.

Such empowerment begins at the grassroots, says Kaicombey, and is multifaceted in its approach. While retributive justice primarily focuses on a punishment to match a crime, the restorative model looks toward healthy communities as its long game. This means providing education, health care, and job opportunities to offenders in order to help them become self-reliant and escape the cycle of crime. Traditional models of healing, including indigenous and newcomers models, must be utilized in order to support holistic approaches to reconciliation.

Kaicombey believes that a major piece missing from retributive justice is a focus on mental health. The result can be a disregard for the factors which contributed to the crime in the first place, preventing the offender from being truly rehabilitated. The priority retributive justice places on punishment creates lop-sided communities which never truly heal.

For those who haven’t seen the process in action, restorative justice can sound unduly optimistic. Kaicombey reminds sceptics of his own lived experience through the trauma of war and asks if the Canadian criminal justice system has been any more successful than the Sierra Leonian Truth and Reconciliation Commission.